The Nasdaq is poised to start September on a high, after its best monthly performance since the peak of the 2000 dot-com bubble.

Big surges in tech names including Apple, Amazon, Cisco, and Nvidia propelled the index higher to hit records three times in the final week of the month. However, some of those stocks now look a little stretched to Craig Johnson, chief market technician at Piper Jaffray.

“Let’s break down some of these stocks. First, if you look at Apple, this is almost a parabolic-looking chart and parabolic charts typically end poorly,” Johnson said on CNBC’s “Trading Nation” on Friday.

Apple surged more than 19 percent in August, in its best monthly gain since April 2009. It made history earlier in the month when it passed $1 trillion in market cap, a first for a U.S. publicly-traded company.

Some Wall Street bulls are looking at Amazon, or perhaps even Microsoft, as the next big tech titan to reach that milestone. First, they have to give back some gains, Johnson said.

“Amazon, great-looking chart, but we’d be a buyer of that stock toward $1,825 on a pullback,” Johnson told CNBC. Meanwhile, software giant Microsoft also has good technical indicators, with Johnson suggesting the stock would be a buy if it pulls back toward $105.

On Friday, Microsoft closed above $112, while Amazon settled over $2000. A move to $1,825 in Amazon represents a 9 percent decline from its Friday close, while $105 in Microsoft would mark a 7 percent drop.

Johnson added that its Cisco, an older tech bellwether, that could be poised for a run to the upside. The stock, trading under $50 with a relatively low market cap near $225 billion, may be a value pick for some investors.

“Cisco has finally just broken out of the consolidation range it’s been in since all of 2018,” the analyst said. “I can see a measured objective here into kind of the $51, $52 range on this breakout and that’s a stock I’d be buying here today.” 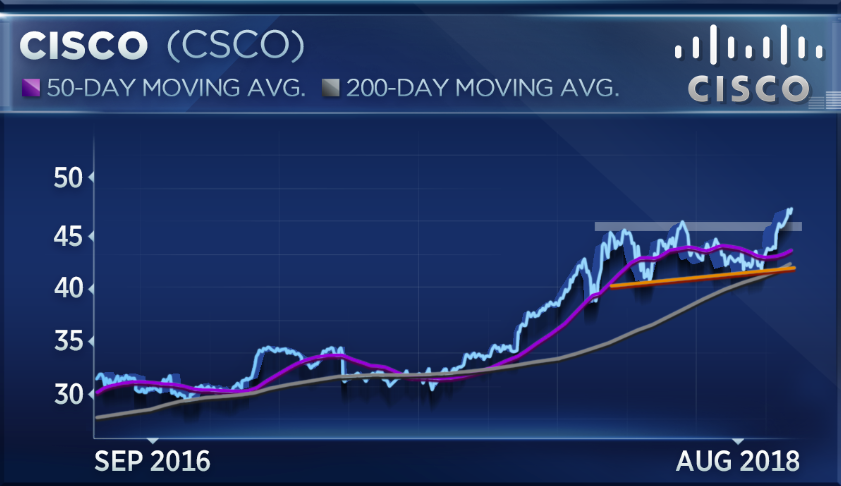 A move to at least $51 represents a 7 percent increase from Cisco’s Friday close. It would also mark its highest level since late 2000.

“We own Apple and Cisco right now,” Binger said on “Trading Nation” on Friday. “They’re both cheap, they’re both under 20 times next 12 months’ earnings. Both fundamentals are really good right now. I think you could buy either one of those right now.”

Previous PostSeagate, Western Digital shares plunge after Evercore ISI downgrades storage stocks due to pricing pressure Next Post'There's so much demand' for property in Singapore

As brokerage firms go to zero-commission on trades, advisors worry

2020 Oscar nominations show the Academy has an issue with diversity