Economists say ADP’s monthly report does not always line up with the government jobs report, and so far they have not pared back expectations for Friday’s government nonfarm payrolls data for May. However, some warn that Refinitiv’s consensus forecast for 185,000 jobs could be a bit too high following the soft ADP report.

Mark Zandi, chief economist at Moody’s Analytics, said he expects to see 150,000 new jobs in May, with one possible positive catalyst coming from government hiring of census workers. The ADP report is published in collaboration with Moody’s.

Zandi said ADP’s weak May data showing just 27,000 new private-sector jobs could have been skewed by the sharp drop in unemployment claims in April to a 50-year low, which was followed by a quick bounce back. Just as it created an unusual dip in ADP’s May jobs forecast, the fluctuation in weekly claims data drove the ADP April payroll forecast to the high side, at 271,000 jobs. The actual government report in April was 263,000. 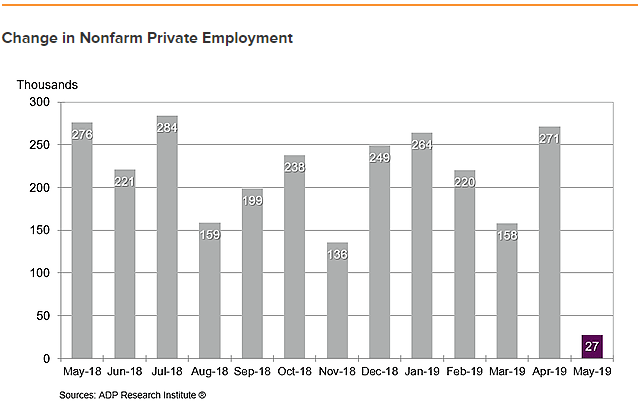 But Zandi said the overall ADP payrolls number, which is not released, does show a softening in the labor market which was also there last month.

Wednesday’s report, however, did raise doubts about the strength of the labor market, as economists are increasingly expecting the Fed to cut interest rates. In the bond market, the 2-year yield, most reflective of Fed policy, slipped as low as 1.75%. Expectations in the futures market for Fed rate cuts went from two this year to nearly three, according to NatWest Markets.

“Last month, [ADP] overstated the strength. This month it overstated the weakness. The reality is job growth is slowing, notably slowing, but in the scheme of things, it’s still strong. I would take an average for the two months, and that would be 150,000 on the nose, and that’s where we are — 150,000,” said Zandi. “That’s well below last year’s 225,000, but it’s still above the 100,000 needed to sustain stable employment.”

Zandi said President Donald Trump’s trade policy will determine what happens to the labor market, which has been very strong with decades’ low unemployment of 3.6%.

“It’s on a razor’s edge. It depends entirely on what the president decides to do with on tariffs,” said Zandi. “If he escalates and follows through with his threats, I think recession is likely. If he calls a truce and we stay where we are, I think the economy will settle in around 100,000 this time next year. If he finds a way back from the tariff war, we have some upside potential.”

Michael Gapen, chief U.S. economist at Barclays, sees the ADP report as an anomaly and expects May’s nonfarm payrolls to increase by 175,000. However, Gapen also foresees slowing job growth and a weakening economy, which he expects will force the Fed to cut interest rates by 75 basis point this year.

Gapen said jobless claims, at about 216,000 last week, and other measures were not sending negative signals on the labor market.

“ADP underscores an emerging theme and that is that the economy is slowing, and with the threat of additional tariffs, now risks contracting sooner,” said Diane Swonk, chief economist at Grant Thornton. “Our forecast is buoyed by the wild card on census hires. Absent a boost from census hires, private payroll growth to slow.”

Daniel Silver, U.S. economist at J.P. Morgan Chase, said in a note, that he still expects 160,000 nonfarm payrolls in Friday’s Labor Department report. “But the May [ADP] reading on its own was the weakest monthly change since May 2010 and certainly raises the possibility that the labor market is weakening more than we had anticipated.”

Trump says GDP, Dow would be higher if it weren’t for the Fed