There is a whole host of reasons, including personal preferences and economic disadvantages, that explain why the homeownership rate for the largest generation in U.S. history is lower than that of their parents and grandparents.

“In my generation — I’m a baby boomer — you bought a home as quickly as you could,” said Laurie Goodman of the Urban Institute. “You didn’t take a vacation for years to save for the down payment on your first home.”

Millennials are in less of a rush to get their hands on house keys, Goodman said.

Delayed marriage has one of the biggest impacts on their low homeownership rate, the Urban Institute found. Marriage increases one’s likelihood of owning a home by 18 percentage points.

Yet millennials are wedding later — and less. In 1960, the average age at which women and men first married was in their early 20s. Today, the median age for a first marriage is closer to 30. And millennials are three times as likely to have never married as members of the silent generation — those in their 70s and 80s — when they were young.

Young people are also in no rush to have kids. The share of married households with children, aged 18 to 34, dropped to 25% in 2015, from 37% in 1990. And having a child increases a person’s chance of owning a house by 6 percentage points, the researchers at the Urban Institute calculated.

Millennials are also a far more diverse generation than previous ones, and homeownership rates are lower among Hispanic, black and Asian Americans compared with white Americans. While almost 39% of white millennials, aged 18 to 34, own a house, just 14.5% of those black Americans do, according to the Urban Institute.

In my generation, I’m a baby boomer, you bought a home as quickly as you could.

a researcher at the Urban Institute

“The homeownership rate for blacks is falling more than it is for other groups,” Goodman said.

The unprecedented student debt millennials take on also reduces their chances of landing in a home of their own. Researchers at giant mortgage company Freddie Mac recently found that more than half of workers employed in the “essential workforce,” including in fields such as health care, education and law enforcement, have made their housing decisions based on their student debt.

If a person’s education debt went from $50,000 to $100,000, their chance of homeownership declined by 15 percentage points, the Urban Institute found. 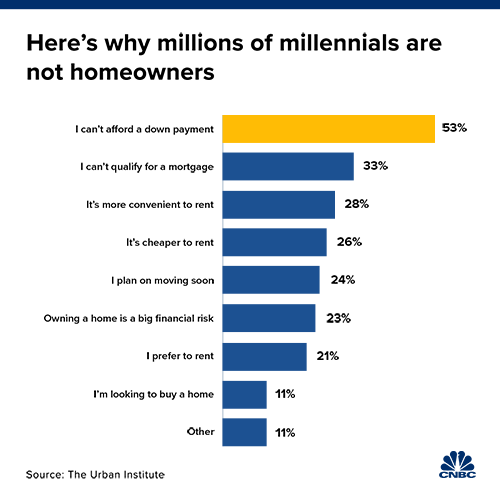 Millennials are also renting for longer in locations that tend to be pricey, making it harder for them to save up for an eventual down payment. Nearly half of households headed by people ages 18 to 34 are rent-burdened, meaning that more than 30% of their paycheck goes to their landlord.

Goodman said she was surprised to learn just how much one’s chances of homeownership increases — by more than 10 percentage points, if their parents were homeowners. She said these people have learned the value of a home.

Although Goodman expects the homeownership rate for millennials to pick up as they get older, the fact that they’re buying homes later than previous generations means, “they’re building wealth much, much more slowly.”

Britain Says Huawei Won’t Be Banned From Its 5G Network