The CEO of manufacturing company Polaris Industries is calling an impending tariff increase a catastrophe for his business.

In a phone call with CNBC Tuesday, Polaris CEO and Chairman Scott Wine flagged major implications of the White House’s plan to up tariffs on Chinese goods to 25%, effective Friday night if the U.S. and China aren’t able to strike a trade deal.

“At 25% it’s downright catastrophic in terms of impact on the company and employees,” Wine told CNBC’s Morgan Brennan.

The maker of snowmobiles, ATVs and motorcycles has already seen effects from earlier rounds of tariffs levied between the world’s two largest economies. Polaris is factoring in roughly $90 million in additional tariff costs this year. And if new tariffs are introduced on Friday, it’s expecting to take a hit of between $195 million and $200 million, Wine said.

The CEO also said the increased tariffs could erase a third of the company’s net income. The company has an employee stock ownership plan, and in this case employees own 5% of the company. Wine underscored the effect it could have on Polaris’s stock, and therefore employees.

“When we are hit with tariffs, that’s what I mean by impact to employees,” he said. “Through no fault of our own, one-third of our net income could go away.” 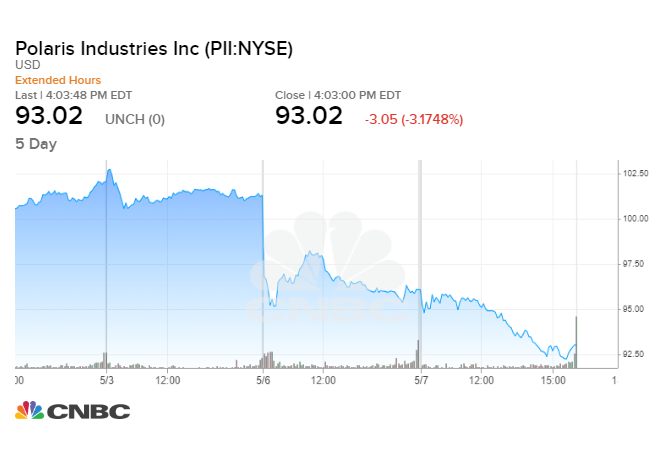 Shares of Polaris dropped sharply on Monday after the Trump tweet. The stock is up roughly 21% this year. In the last 12 months, Polaris shares are down roughly 15%.

Many traders had shaken off the president’s weekend threat as a negotiation tactic. But on Tuesday, stocks saw their biggest decline since early January after U.S. Trade Representative Robert Lighthizer told reporters that the U.S. will increase levies on Chinese imports on Friday.

Polaris competes largely with Canadian and Japanese companies. The CEO cited an unfair advantage since its global competitors don’t manufacture within the U.S.

“What’s most ironic is I invested $150 million to build new plant in Huntsville — at the same time our competitor built one in Mexico,” he said. “They don’t pay the tariffs, and we do.”

It’s not just China. Retaliatory tariffs in Europe are costing the company almost $20 million to ship Indian motorcycles into Europe, Wine said. The company raised prices earlier this year to account for the higher tariffs.

Wine said Polaris also moved $10 million worth of supply chain manufacturing out of China because of tariff costs. But it still relies on highly technical suppliers in the country, and in most cases, he said it would take over a year to get another option up to speed. The company has a facility in Monterrey, Mexico, which it may lean on in the case of another increase.

“Ultimately if this was not resolved, we would have no choice but to move production to Mexico” Wine said. “This would essentially be forcing me to push jobs outside the U.S.”