Home Investing Tesla shares are about to take a turn for the worse: Piper Jaffray

Tesla shares are about to take a turn for the worse: Piper Jaffray

The stock has tumbled more than 17 percent this year with losses accelerating last week following a mediocre reception to its Model Y unveiling. It is now 29 percent off its record high set in September 2017.

One technical analyst says the stock charts point to more hardship ahead for the electric vehicle maker.

“You’ve been stuck in a trading range for about 2½ years – $245 on the lower end, $390 on the upper end. Back in December, you lost power at $390. You’ve been backing and filling since,” Craig Johnson, chief market technician at Piper Jaffray, said Friday on CNBC’s “Trading Nation.” 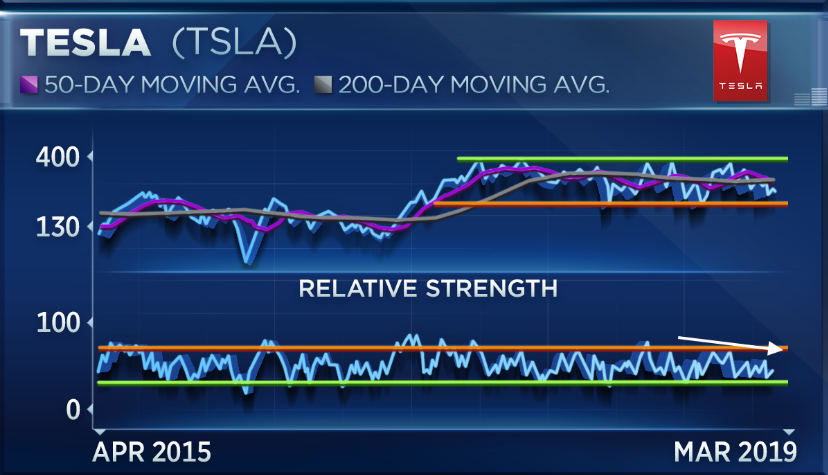 “To me, it looks like we’re going to come back down and retest the lower end of this price channel, confirm it before you can do any sort of tactical trading opportunity with these shares,” said Johnson. “I’m waiting for it to pull back and retest that level.”

A drop to $240 would mark a decline of about 13 percent from current levels of $276. The stock has not traded below that price since the beginning of 2017.

“I can’t get comfortable owning it right now,” Bapis said Friday on the show. “They’re really struggling with brand definition. They don’t really know who they are. They don’t know what’s the difference between them, Ford, GM, and they’re struggling with production and delivery issues. The competition is heating up.”

Volkswagen has ramped up its push into the electric-vehicle space with $9 billion bookmarked for development at its Audi arm. “Tesla killer” Nio is also making strides in the Chinese market.

Tesla also trades at an extreme premium compared with its peers, says Bapis.

Tesla is the second-worst performer on the Nasdaq 100 this year. It is down 51 percent over the past 12 months.

Unemployment is nearing Great Depression levels. Here's how the eras are similar — and different